Parents often wonder why they spend $50 on a toy when their child is just as happy playing with the box that housed the toy.

Two University of Alabama researchers are hoping to one day have the answer to this age-old conundrum as they begin to look at how children use objects in their play.

In pretend play, children often use one object as a substitute for another — they pretend a box is a car or a stick is a sword. Not surprisingly, object features like shape and markings can matter a lot in object substitution.

In a recent study, Drs. Jason Scofield, an associate professor, and Sherwood Burns-Nader, an assistant professor, both in the College of Human Environmental Sciences’ department of human development and family studies, asked whether plain objects — simple shapes with no obvious markings on them — were better at promoting object substitution than ornate objects.

Children were read a story about a young boy named Tommy who needed helping finding particular items in different scenarios. The children were asked to pick which of the four best fit the object needed in each scenario.

In one scenario, Tommy wanted to go outside and play with his friends, but it was cold, and he needed a jacket. His jacket was missing a button, so the children were asked which of the four items could be a button.

The idea is that plain objects offer more flexibility to children, which can be helpful information for parents and childcare providers when purchasing toys, Burns-Nader said.

“For example, a stick could be a sword, baseball bat, golf club, something to skewer a hot dog on, logs for a fire — it can be so many things,” she said. “But if you have a sword, it tends to just be used as a sword.”

There are many simple objects that can be used in play — pipes and connectors from hardware stores, toilet paper and paper towel rolls, blocks, cloth dolls, magna-tiles and pretty rocks and natural items from outdoors.

“If most of a child’s toys have a set identity, are they going to maximize the child’s imagination, or is it better to have a bunch of plain objects that can be whatever the child wants?” Scofield asked. “If the goal is to help kids be more imaginative and flexible in their play, it’s to their advantage to have objects that have a fluid identity. You can use a sword when you’re dueling, but swords won’t hit home runs.” 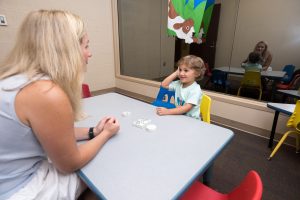 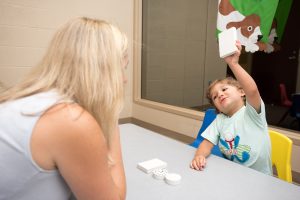 Dr. Sherwood Burns-Nader asks a child to select the best object that represents a cell phone. 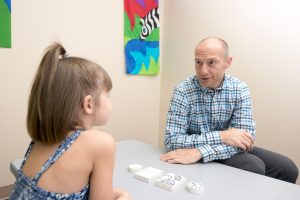 Dr. Jason Scofield starts telling the story to a child. 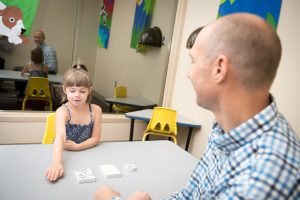 Dr. Jason Scofield asks the child to select the best object that represents a tire. 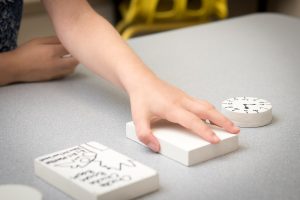 Dr. Jason Scofield asks the child to pick the best object that represents a cell phone.