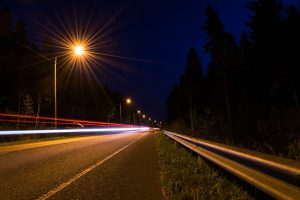 TUSCALOOSA, Ala. – A study of Thanksgiving week vehicle crash data from the past five years in Alabama shows travel after dark increases risk for crashes and fatalities, leading to the conclusion that, if possible, all modes of transportation should be avoided after the sun goes down.

“These findings show the rationale behind our strong recommendation to avoid traveling in the darkness during Thanksgiving week if at all possible,” said Dr. David Brown, who led the study for the UA Center for Advanced Public Safety in partnership with the Alabama Transportation Institute.

Fatal crashes in darkness are over three times their daylight hour expectation during the week of Thanksgiving, caused by factors such as driving under the influence of alcohol and other drugs and driving too fast for nighttime conditions. Delayed response of first responders at night in rural areas is also a factor for the increased fatal crashes, according to the study.

The study employed the Critical Analysis Reporting Environment, or CARE, a software analysis system developed by CAPS research and development personnel to automatically mine information from existing databases.  The software allows comparisons among crash subsets to mine the data for over-representations, which are items significantly higher than what would be expected compared to the general population of crashes.  The Alabama Law Enforcement Agency, or ALEA, provided the crash records for the study.

“We started by looking at the causes for all crashes during past Thanksgiving weeks in 2016 through 2020,” Brown said. “But we quickly observed that a comparison between crashes in darkness and those in daylight might be most fruitful in generating useful information.”

The amount of darkness during Thanksgiving week increases, not only because the month is late in the year, but also because of the ending of Alabama’s Daylight Savings Time the first week of November, which means an hour earlier sunset on the clock. In 2021, this will occur just two weeks before the Thanksgiving week, not giving drivers much of a chance to get adjusted to the change, Brown said.

Driving while intoxicated by alcohol or drugs is much more common in nighttime hours, and it is another reason for there being 70% more crashes after dark. During the past five Thanksgiving weeks, there were 543 alcohol-related crashes, and 410 of those happened at night, an over-representation of 5.2 times the expected proportion in comparison with non-Thanksgiving crashes. DUI and its accompanying risky behaviors are the number one cause of fatal crashes.

“Obviously to avoid the negative effects of alcohol and drugs it is wise to avoid the hours of darkness,” Brown said. “You do not have to be drinking to be killed by a DUI driver.”

Deer are another complicating factor at night, as crashes with deer top the list of causes that greatly exceed expectations during Thanksgiving week. Rural roads, where most deer crashes occur, are also particularly dangerous at night because of lack of lighting and increased speeds. Brown advised taking interstates when possible as they are generally built to a higher safety standard and well-lit around major intersections.

Drivers tend to be sleepier at night, with fatigue and sleep listed as occurring 60% more in darkness than during the day over the holiday weeks.

“Most people can perceive when they are getting drowsy,” Brown said. “When that happens, pull over and take a nap, or do whatever is needed to get out of that dangerous state.  If you fall asleep while driving, the results are totally predictable, and they are not good.”

Arrival of emergency medical services and other first responders is delayed at night, with response times taking 30 minutes to 90 minutes more than what was expected. These could be responses to crashes where a lone vehicle runs off the road and is not discovered immediately at night.

Brown urged drivers who must travel at night to buckle up. During the period covered in the study, the probability of crashes after dark resulting in death was increased over 18 times by the failure to be properly restrained by a seatbelt, from one fatal crash in every 239 crashes to one in 13.

“The failure to buckle-up is highly correlated with other risky behaviors that lead to crashes,” he said.