A famous country music duo once said that love can build a bridge. Elizabeth Naranjo Hayes believes that learning a language can do the same. In fact, the soon-to-be romance linguistics doctoral graduate will set out to prove it.

“My heart is to be a bridge between people and between cultures,” she explained. “I believe that the world would be a better place if everyone learned one more language. That way they would be able to talk to someone they otherwise never would have talked to.” 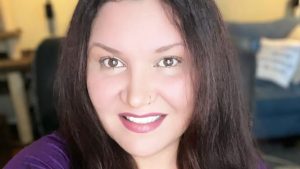 Hayes accomplished the rare feat of earning a tenure-track faculty position right out of graduate school. She’ll be teaching Spanish and Spanish linguistics this fall and French in the summer at Truman State University in Kirkville, Missouri, kicking off her 20th year of teaching. This is likely not too surprising to her students. According to the Rate My Professor website, as of December 2021, she was the second-highest ranked professor at UA and the highest-rated professor at Columbus State University in Columbus, Georgia, although she hasn’t taught there since 2018.

The San Diego native is the daughter of Mexican immigrants whose ancestors came to Mexico from Northern Italy and France. She credits her heritage and life experience for her ability to prepare college students for life after college by teaching them a new language, advising them and helping them apply their new language skills to life. That experience has included living on each coast in the U.S., serving as an active duty Army officer in the U.S. military and spending some time in France during high school.

“I’ve lived many of the experiences that college students might face — marriage, being in the military, living abroad,” she said. “I’m here to guide them on to their careers and use my life experience to do that.”

“I am also a disabled veteran, a first-generation college student and was a student as a young parent, so I can personally relate to my students to help them in many different ways,” Hayes explained. “My girls are openly LGBTQ+, so that is another area in which I am an ally.”

Hayes believes students must immerse themselves in the culture of a language to learn it. She incorporates that in her teaching methodology, which is understandably popular among her students.

“I teach through the songs on the Billboard Hot Latin charts,” she said, explaining this approach was part of her master’s thesis at San Diego State University. “I showed that if you use the song lyrics to teach the grammar, the music to sing along and teach the pronunciation, the music videos to teach about the culture and have students move to the music so they incorporate both sides of the brain, it absolutely sticks.”

Hayes applies this same methodology to Francophone music but noticed many students aren’t familiar with it.

“I think people think of the French language as only in France, but it is spoken in many parts of Africa and in the Middle East as well as in South America and the Caribbean!”

She even served as the sole interpreter for the Federal Court of the Middle District of Georgia for several years, working on deportation cases, an experience she described as heartbreaking and that served to solidify that teaching was the path for her.

In her new tenure-track position, Hayes has found herself where she feels her path was always leading her, and her degree and experiences from The University of Alabama helped her get there.

“I never thought I would get to teach Spanish and French and Linguistics in one place,” she said. “And when they told me I could do all three here, I was like that is the dream. I’m living my dream.”