The University of Alabama is well-known as one of the best college campuses in the country, but it offers more than just academics and athletics. Tucked within the campus are hidden gems for a picture-perfect social media post. Whether it’s your first time on campus, posing for graduation photos, or just looking for a nice place to snap a selfie, these 10 locations in-or-around campus are worth visiting.

#10: The University of Alabama Arboretum

The University of Alabama’s Arboretum may be tucked away within Alabama’s forest, but it offers several picture-perfect spots, hiking and more.

Just beyond campus, the arboretum is a hidden treasure for photo enthusiasts. The arboretum is home to a conservatory for butterflies and bumblebees, as well as year-round beautiful flowers and more than 100 specific breeds of trees, ranging from native to Alabama to all over the world.

Before you go, make sure you make a reservation with the arboretum to get the full experience and see nature up close.

#9: Manderson Landing and the Minerva statue

The statue of Minerva shines next to the Black Warrior River.

Nestled along the Black Warrior River sits Manderson Landing, home to Alabama Rowing and the recently unveiled Minerva statue. The statue was built by local artists Caleb O’Connor and UA professor Craig Wedderspoon in honor of Tuscaloosa’s bicentennial celebration. Minerva, the Roman goddess of wisdom and strategy, is a longstanding symbol within the University, appearing on the UA seal.

Top tip: Visit Manderson landing during the “golden hours” for best shots with not just the Black Warrior River in the background, but also with Minerva. Golden hours are usually an hour before sunrise and sunset.

Gorgas House makes a great backdrop no matter the season. From blue hydrangea bushes to the willowing oak tree, this is a can’t miss spot.

Built in 1829 as the first building on campus, Gorgas House was originally a dining hall, a post office, a residence for the Gorgas family, and later, faculty housing. Gorgas House is one of four original buildings to survive the Civil War and the burning of campus in 1865. The landscaping and stunning architecture are a perfect backdrop for selfies and graduation shoots. Don’t forget to make a reservation to enter the house and take in the details of what life was like when it was home to the Gorgas family.

Fun fact: In 1971, Gorgas House was added to the National Register of Historic Places. 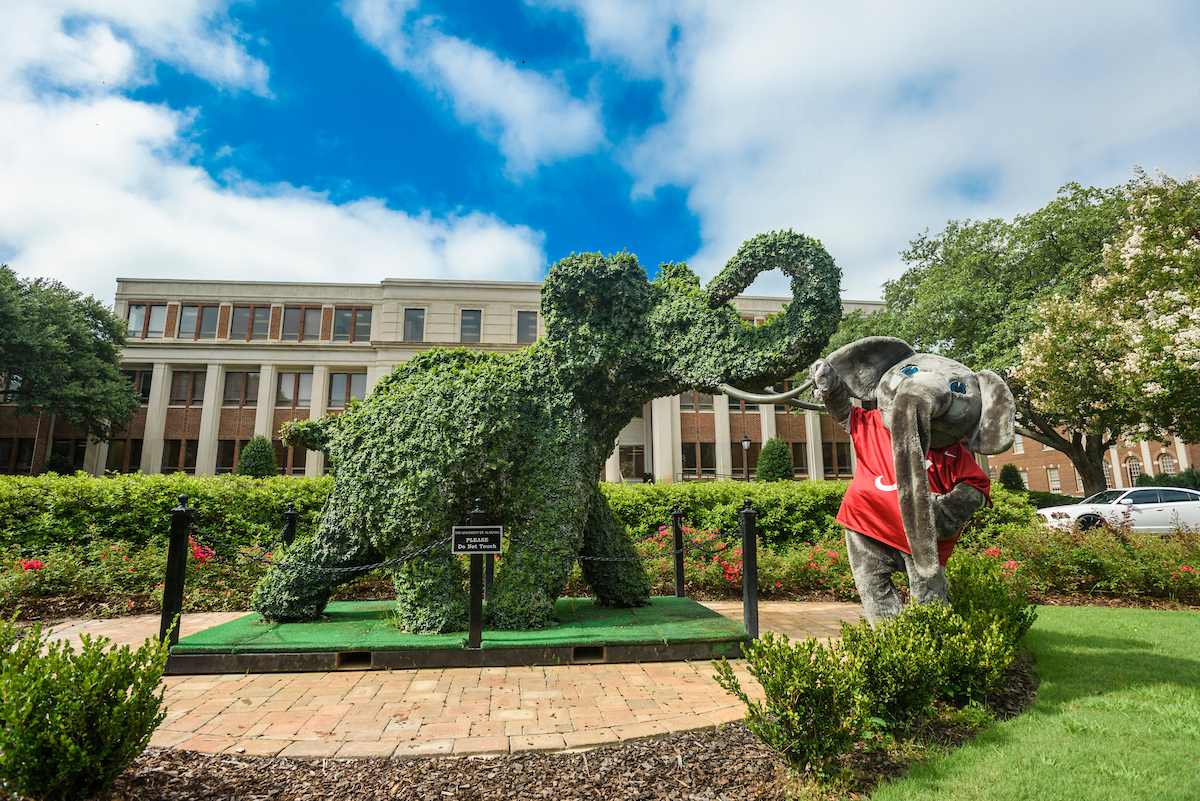 Big Al stands next to the University’s topiary elephant in front of Rose Administration.

Built in 2015 at the request of UA President Dr. Stuart R. Bell, the elephant topiary is an iconic spot on campus, not just for game day fans but for anyone who loves the pachyderm. The topiary can be found in front of Rose Administration during football season and other times throughout the year. The topiary also sports a red graduation cap each semester, standing out as a 4.0 GPA star.

Did you know? The topiary was inspired by Walt Disney World’s character topiaries. 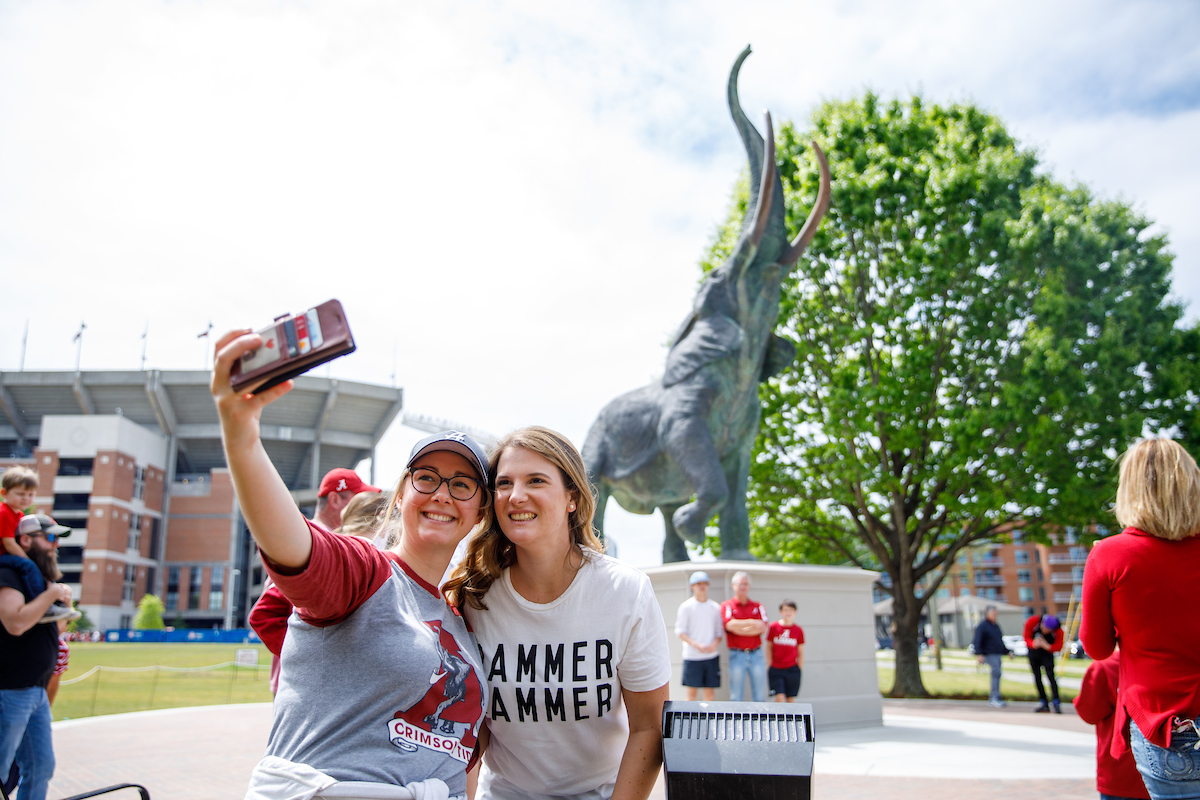 Fans take a selfie with UA’s latest statue, Tuska. The bronze pachyderm was donated in 2021 to the University.

UA’s newest statue is a seven-ton, 19-foot bronze elephant named Tuska. Originally standing at the entrance of the NorthRiver Yacht Club since 2000, Tuska was donated to the University in 2021 and was unveiled on campus April 12, on the corner of University Boulevard and Wallace Wade Avenue. The statue was created by Terry Matthews, an English sculptor known for his realistic wildlife sculptures. The life-size bronze statue is thought to be the largest of its kind in the world. The statue resides in its own plaza. 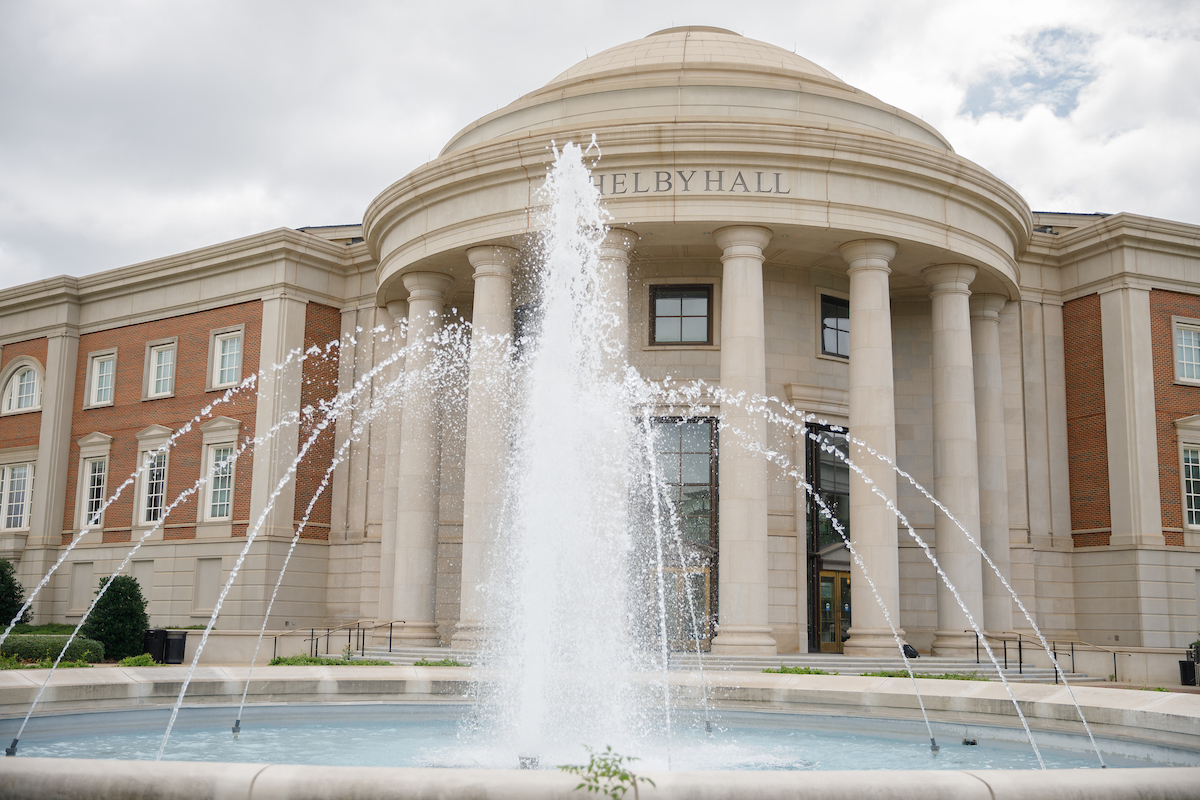 The Shelby Quad, which is the home to most engineering classes, is one of the most idyllic areas on campus.

Tucked within the main campus is Shelby Quad, one of several quads at the Capstone. Named after Sen. Richard Shelby, the wide-open area is an excellent location for portraits. The fountain, which has become the main feature in Shelby Quad, offers a beautiful backdrop with its jets of water. Other great spots around Shelby Quad for pictures are Shelby Hall, the nearby Foundry, and other engineering buildings that might be near and dear to one’s heart.

Marr’s Spring Pond is easily missed when walking around campus, but it played a massive role in the building of the University. Originally, Marr’s Spring was the campus water supply, until the Capstone joined the city’s water supply, leaving the pond to become a scenic background for stunning photos. The pond is now a thriving ecosystem for small fish and is a popular study spot for students as it is very secluded from campus business.

Don’t miss this:  Different insects and amphibians can be spotted around the pond throughout the year.

#3: Bryant-Denny Stadium and the Walk of Champions 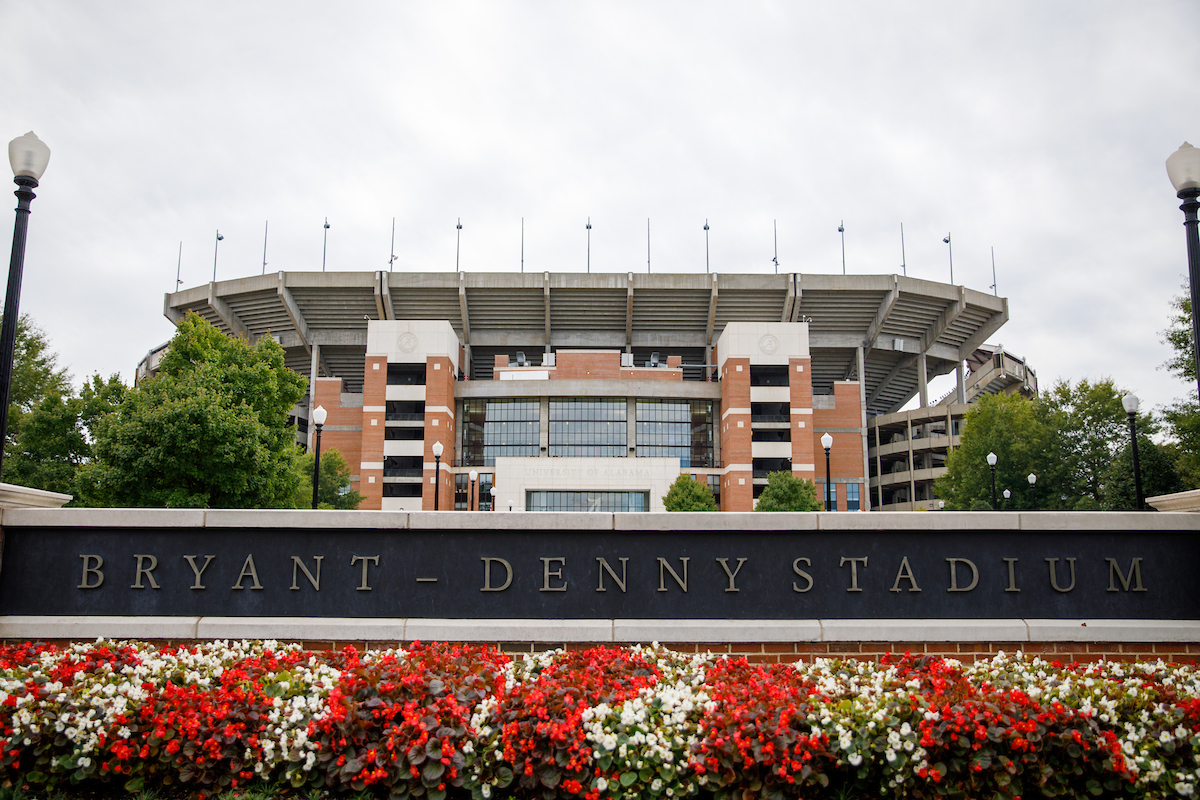 Make the most out of the Walk of Champions by posing with statues of famed coaches and the stadium.

No trip through campus would be complete without a stop at Bryant-Denny Stadium and the Walk of Champions. Located near Tuska Plaza, the Walk of Champions is marked with pavers for every SEC or NCAA championship, as well as five bronze statues of coaches Wallace Wade, Frank Thomas, Paul W. “Bear” Bryant, Gene Stallings and Nick Saban. Don’t forget to make sure you pose with The University of Alabama sign in front of the stadium—it’s the perfect spot to get the most of the stadium in the frame. 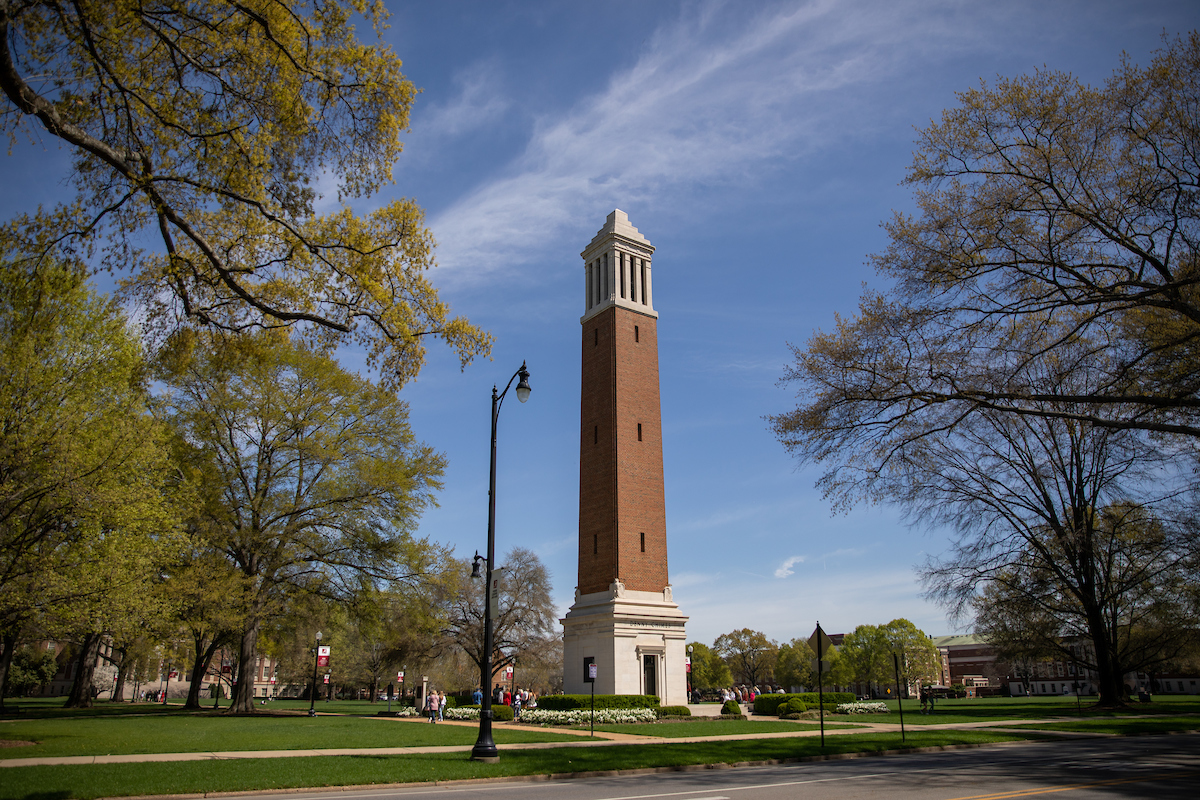 Approximately 20 stories high, Denny Chimes is still one of the most iconic monuments on campus.

Built in 1929 and dedicated to then UA President George Denny, Denny Chimes is one of the best places to take photos. The chimes are also surrounded by UA’s “Walk of Fame,” concrete pavers with the hand and cleat prints of football all-stars dating back to the early 1930s. Pose on the steps, in the doorway and from across the street to get the best shots of Denny Chimes.

Fun fact: Denny Chimes is made out of Alabama limestone and Virginia red brick. 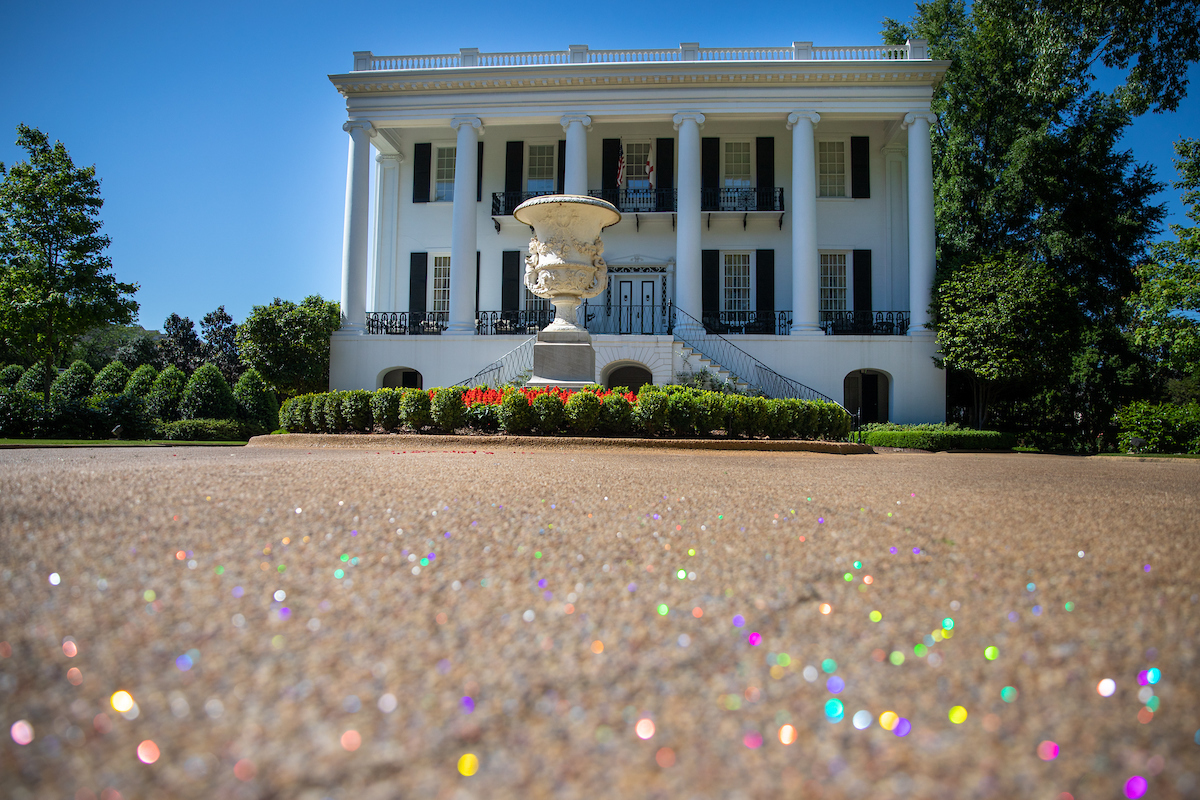 Students, faculty, fans and more are able to take pictures outside the President’s Mansion.

Across from Denny Chimes is the President’s Mansion, home to UA’s current president Dr. Stuart R. Bell and 30 other past presidents. The mansion is one of the most popular places on campus for a photo shoot. You can also safely take photos of Denny Chimes from the mansion’s courtyard. Depending on the time of year, the rose garden, tulip grove and azalea bushes are stunning backdrops for all.

Did you know? The mansion has been home to all but three UA presidents.