Putting together what they learned in college, four students at The University of Alabama adapted a toy ride-on car for a child born with physical challenges, offering the chance to move around with his friends.

“We feel blessed, full of joy – a heart of gratitude – that they took time for our son because it’s making a difference in his life and ours as well,” said Shirley Carter. “It’s something we’ll cherish forever and never forget it.”

Justin, the son of Shirley and Charles Carter, was born with a condition that shortens his limbs, limiting his mobility and independence. His teachers at the RISE Center on campus wanted him to be able to play outside with the other children without relying on someone to carry him or move him, so they approached Alabama Astrobotics, a student team on campus that has gained a reputation for building award-winning robots, to modify a battery-powered car for Justin.

Four UA students from the team took it on as a senior engineering project.

“The goal of the senior project is to bring a culmination of what you’ve learned in your degree, so it means a lot to us to use what we’ve learned to help someone,” said Joseph Kabalin, a senior in mechanical engineering from Loveland, Ohio.

They delivered the car to Justin at the RISE Center as classmates and teachers watched. Within a few minutes of strapping into the driver’s seat, Justin was driving around the playground, relishing his new freedom.

The car Justin drove began on the shelf of a toy store where the students bought it. In the end, the students essentially kept the plastic body and tires, replacing everything else.

Justin has several needs the seniors had to address before he could drive the car. For starters, he cannot reach the original steering wheel or pedal needed to move the car. The car also would be more than just a toy as Justin would rely on it to get around inside and out for much longer than the car is designed.

Lastly, the car could not become a burden for parents and teachers if Justin got tired, so the students wanted a way for them to drive the car rather than having to carry or push it.

They upgraded all the electronics in the car. A control panel with a joystick and buttons replaced the original drive mechanisms such as the steering wheel and pedal. The panel rests closer to where Justin sits in the vehicle.

A second motor was added to give the car more power, turning the car from a one-wheel drive to two-wheel drive and allowing travel over soft terrain such as on a playground or wet grass.

The battery that came with the toy was scrapped for two batteries with more capacity, increasing battery life from roughly 15-20 minutes to possibly more than an hour, depending on use.

In an innovative step, the students added an internal computer with wireless internet that provides the ability to control the car through a custom-built website so Justin’s parents or teachers can operate the vehicle on a smartphone.

“I think the fact that you modify something that his peers play with so he’s able to do something that his typically developing peers are able to do, that’s what we are all about at RISE – children with special needs participating in activities and in a classroom with traditional learners,” said Andi Gillen, RISE director.

Each student brought something to the table, relying on what they learned in the classroom and as part of Alabama Astrobotics. The team competes annually in a NASA-sponsored contest to build a mining robot, and has won several times. From a technical view, adapting the toy car was easier than building self-driving robots.

“We already had the knowledge,” said Joshua Yarbrough, a senior in mechanical engineering from Huntsville. “It allowed us to do a worthwhile senior design project and get practical experience designing and building for a client and meeting their needs. You get an end product that really helps someone in the end.”

The RISE Center, a part of the UA College of Human Environmental Sciences, serves children with disabilities and their typically developing peers, from ages 8 weeks to 5 years. The children are divided by age among six classes, each with 16 students, one teacher and three assistants. The integrated preschool program benefits families in the community and serves as a practicum and internship site for students from UA and other colleges. 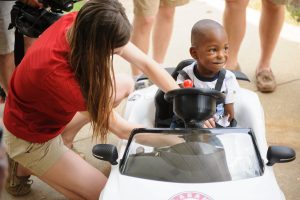 Rebecca Dietz, a UA senior in mechanical engineering from Waleska, Georgia, straps in Justin Carter, a student at the RISE Center, into a car she and other students adapted for Justin to drive. 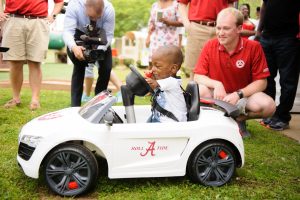 Joseph Kabalin, a UA senior in mechanical engineering from Loveland, Ohio, watches as Justin Carter begins his first drive in a car the engineering students adapted. 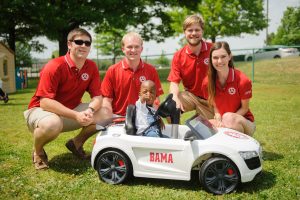 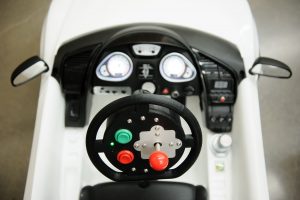 Engineering students at UA adapted a toy, ride-on car for a boy born with physical challenges. The adapted car included a joystick and control panel to drive and steer the car. 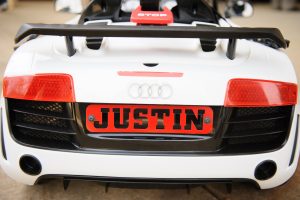 The adapted car includes personal touches such as Crimson Tide stickers and a personalized license plate the engineering students made using a water jet available for student engineering projects.