Welcome to my UA World: Student the Melody behind Chimes’ Music 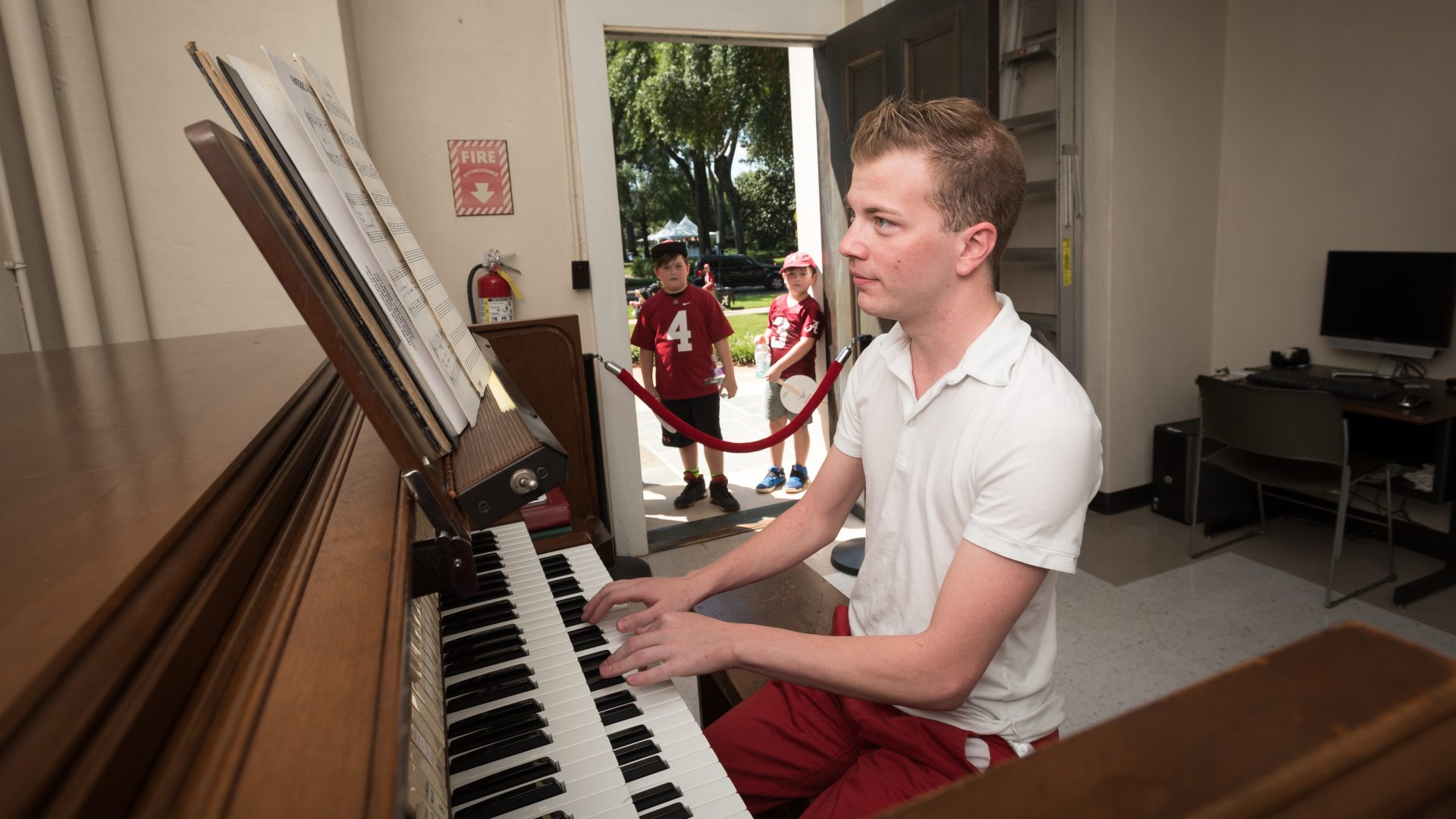 TUSCALOOSA, Ala. — It’s three hours before kickoff, and The University of Alabama’s Quad is swarming with people, tents, events and food.

Suddenly, at least for a brief moment, all of the revelry is drowned out by the sound of bells.

“Let It Go” from Disney’s popular movie “Frozen,” issues from the Chimes’ bells.

Some bust into song: “I don’t care what they’re going to say, let the storm rage on, the cold never bothered me anyway.”

Others become curious and investigate the source of the unusual bell tower melody.

What they discover through an open door to the Chimes, cordoned off with a red velvet rope, is a man sitting inside playing what appears to be a double-row of piano keys. As his fingers dance from key-to-key, the Chimes ring to the tune he bids them to sing.

“They do not realize a human being is playing the Chimes on game days or for memorial services,” said Tyler Canonico, a 24-year-old Baltimore native who’s pursuing his doctorate in organ performance at UA.

“I open the door while I’m in there so people can come look around while I’m playing because they think that it’s an iPod or a recording. I love hearing their stories like, ‘I’m an alumnus, and I never realized there was a person inside here!’”

Canonico has been playing the Denny Chimes modified organ for three years. He started playing as a graduate teaching assistant while pursuing his master’s in music and organ performance.

“I was trying to get a GTA and Dr. Faythe Freeze said, ‘this GTA is available, and I think you would be great for that.’ I said OK.”

For 30 minutes, starting three hours before each Crimson Tide home game kickoff, Canonico plays a medley of songs on the Chimes. His favorites are hymns, movie theme songs, classics from Bach and the UA alma mater.

“I try to do something for every group of people, but it also depends on my mood.”

Learning to play the Chimes wasn’t easy. Canonico has been playing the organ since he was 12, getting his start on the pipe organ at his home church. But, the Chimes is not a pipe organ. It’s a modified bell organ with two octaves of cast bells and digital bells.

More traditional pipe organs, such as the Holtkamp organ in the Moody Music Building’s concert hall, have thousands of pipes consisting of strings, flutes, principals and reeds.

“Denny Chimes plays from an organ console, but it’s very different than a normal organ,” he said. “The thing with the bells is you have to wait for the overtones, and not every bell can go together because they clash, and people think you’re hitting a wrong note. So, you have to sometimes play them a little slower.

“I was kind of thrown into learning how to play the Chimes. I was told I could come practice the night before a home game. I winged it, and ever since I figured it out. To this day I still experiment to figure out what the limitations of the bells are.”

Canonico said playing the organ – an instrument Mozart called the king of instruments – is a calling.

When he plays, the music flows over him, and everything else gets blocked out.

“There’s a connection. You sit behind that big console with all that music coming out of it, and it just entices me. I know it’s what I’m supposed to do.”

This is the first in a series of stories about people who have atypical roles at The University of Alabama.