by Caitlin Tudzin and Mary Wymer

“The main goal of this research is to develop a way for the armed forces to know the top speed at which they can fire a projectile so that the projectile penetrates through to the target,” said Jones. “The challenge has become increasingly difficult, because our adversaries have realized the limitations associated with conventional penetrator technologies, and they have continued to bury their critical assets at greater and greater depths.”

Typically, target penetration depth increases with projectile impact speed when the projectile is fired at a speed lower than critical velocity, Jones said. If the projectile is fired at a speed higher than the critical velocity, it typically buckles soon after it penetrates the target and immediately ceases target penetration. Enemies of the United States realize if targets are buried deep under the sand, chances of destruction are slim.

Jones began the research in 2003. The Air Force is awarding him $480,000 for research over five years. So far, the group has developed stability criteria for long cylindrical projectiles, which are those without nose geometry. His team is working on a new differential equation, incorporating the nose geometry of a projectile and resulting in a new critical velocity estimate.

“Using the results generated by the new differential equation, we hope to establish how significant nose geometry is to the analysis,” explained Jones.

If Jones’ team is successful, the Air Force will have a new penetration model to use in their research, testing and design of new projectiles. 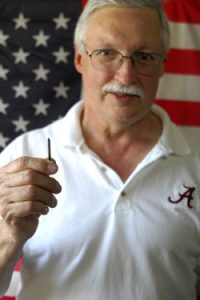 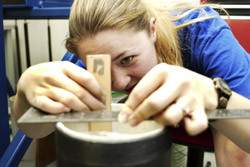 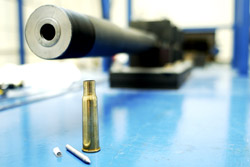