A Gift Like No Other: Ann Hodges and the Meteorite

All Ann Hodges wanted was a nap. Instead, she got a space rock through her roof, and years of unwanted attention as the only human documented to have been hit by a meteorite.

Ann Hodges napped on her couch, snuggled under quilts, unaware that people in three states had seen a light streak across the midday sky. Nor did she hear the boom that some people thought, according to newspaper reports, was a plane crash.

Suddenly something blew a hole in her roof, ricocheted off a large Philco radio and struck her in the side. Ann later said she thought the space heater had exploded, but when the dust cleared, there was a grapefruit-sized rock. She called for help and the mayor, police chief and fire department arrived.

The police chief confiscated the rock and Ann was taken to the hospital, as much for nervous distress as physical injury.

The day after she was hit, a farmer, J. McKinney, found a second fragment and soon thereafter sold it to the Smithsonian Institute. Officially both pieces are part of the Sylacauga Meteorite, but the piece that hit Ann Hodges is affectionately known by her name.

For months the 8.5-pound meteorite passed among authorities and finally back to Ann and her husband. Offers to buy it poured in. But a legal battle with their landlady over ownership dragged on until, by the time the Hodges were free to sell, no buyers were found.

Walter B. Jones, then director of the Alabama Museum of Natural History, approached Ann about obtaining her meteorite. Transaction records in the department of museum research and collections show the Hodges received money only to reimburse them for debts incurred due to the meteorite strike, according to collections manager Brooke Bogan. Ann Hodges made no profit and asked for none.

“I believe it was important to Mrs. Hodges that she is remembered for donating it for the good of the Alabama people, as that is what the correspondences strongly urge was her reason to deny offers in the $5,000+ range and go with our museum instead,” Bogan said. 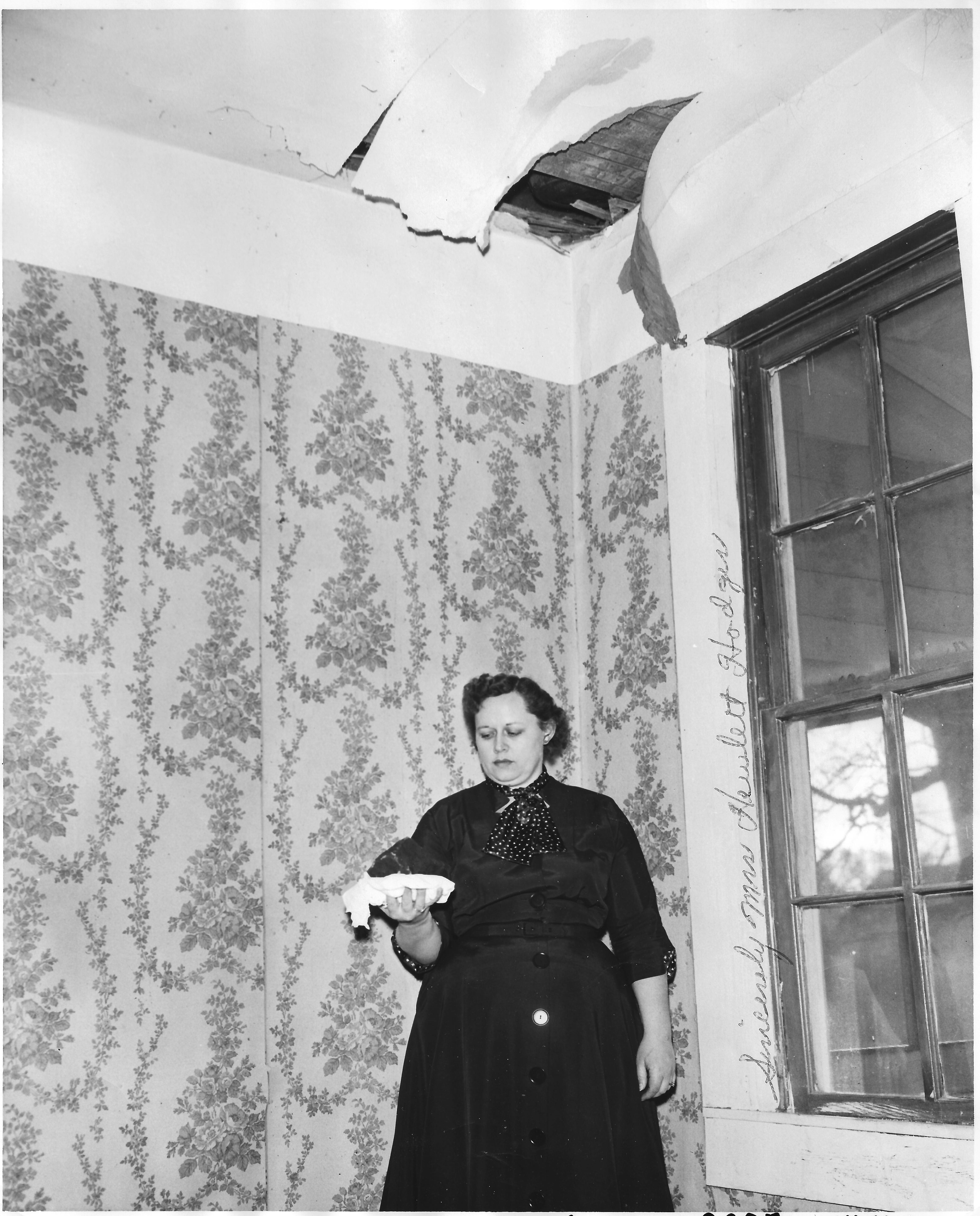 Ann Hodges, holding the meteorite that struck her, stands under the place where it plunged into her house. (Photo provided by Museum Research and Collections)

Long before the age of the woolly mammoth and other fossils in the Alabama Museum of Natural History, the meteorite had started its journey through space.

Millions of years ago, somewhere between Mars and Jupiter

Geochemist Dr. Julia Cartwright, assistant professor in the department of geological sciences at UA, studies meteorites to better understand the formation and evolution of the solar system. She outlined the likely origins and age of the Sylacauga Meteorite.

How did this rock end up on a collision course with the Earth? “It’s very likely that there was some kind of event or movement in the asteroid belt – think of a few large pieces of rock colliding with one another. This sort of event would have been enough to have sent a fragment of an asteroid hurtling through space, where for millions of years the sun’s gravity tugged it Earthward at a speed of between 11 and 78 kilometers a second,” Cartwright said.

Despite the vacuum of space, it had plenty of company during its travels.

“People don’t realize how much space matter — about 78,000 tons — reaches Earth every year,” Cartwright said. “Most of it is far too small to notice. There’s probably space dust on the roofs of our houses right now!”

Present day, back on Earth

Ann Hodges and her meteorite are still a subject of interest. While the Hodges case is the only documented report of a person being struck by a meteorite, incidents of space debris hitting objects such as cars are not uncommon, Friel said.

“There’s a lot of interest in these so-called ‘hammers.’ Several museums have asked to borrow our meteorite, and we did loan it to the Paris Museum of Natural History,” he said.

Before the meteorite’s 2018 Paris sojourn, it had to be valued for insurance, Friel said, which was hard to do for a one-of-a-kind object. Finally, a sum of over $1 million was set.

But its worth goes far beyond money, according to Cartwright. Researchers would love a piece of the meteorite, but even Cartwright has only one sliver as a thin section loaned from the museum. Her research into the composition of meteorites requires destruction of the samples. That’s not an option in this case.

“The Sylacauga Meteorite is not just any meteorite. It’s a unique artifact, and we have it due to an unfortunate event for Mrs. Hodges, and her ultimate want to donate it to the museum.”

More information on the Hodges meteorite and other exhibits can be found on the Alabama Museum of Natural History website.

The meteorite and the Philco radio it struck.