It was 1963 and the city of Birmingham was going through a racial revolution. Demonstrations and peaceful protests were met with violence. Rev. Dr. Martin Luther King Jr. was in Atlanta at the time and decided to travel to Birmingham to help mobilize the moderate movement. Eight white clergymen had just published an open letter April 12 in the Birmingham News urging restraint.

King was arrested later that day and spent 9 days in the Birmingham City Jail, including time in solitary confinement. He wasn’t allowed to make a phone call. The Kennedy administration intervened on his behalf, as his wife had recently given birth.

While there, he wrote notes in the margins of the Birmingham News, reaching out to most of the eight white clergymen. Those notes, passed through a jail trustee and then to King’s lawyer, were transcribed by a secretary and compiled into a letter that would then be sent out to seven of the eight clergymen.

The letter was copied by the Southern Christian Leadership Conference and mailed to other clergymen throughout the state. One of those recipients was Methodist minister Rev. Joe Higginbotham of Centre, Alabama. In 2006, his wife, Ann, generously donated the letter to the University. Recently, University Library Special Collections digitized the 21-page Letter from Birmingham Jail to offer readers a chance to experience its impact.

An early copy of the letter Dr. Rev. Martin Luther King Jr. wrote in 1963 from the Birmingham City Jail was donated to University Special Collections in 2006. 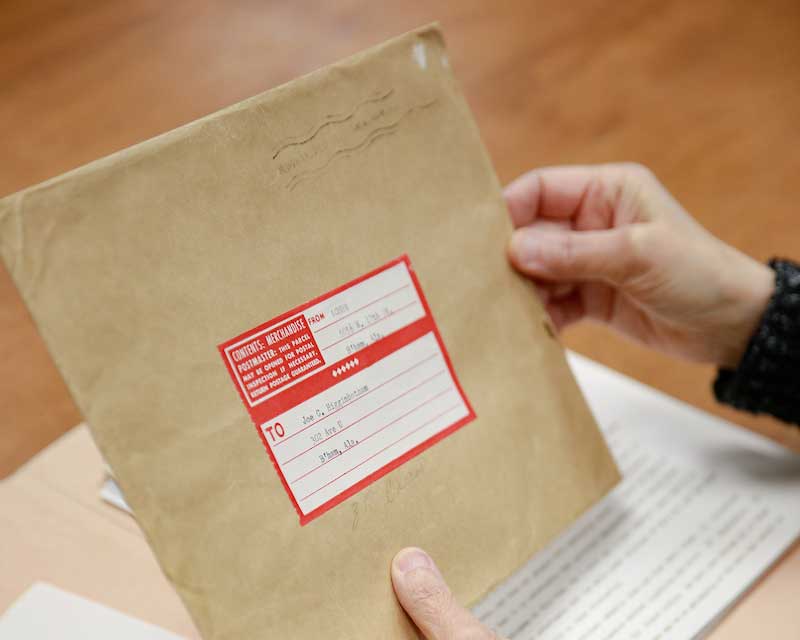 The envelope that contained the letter is also in Special Collections.

Dr. Lorraine Madway, professor and associate dean for special collections, said the department will continue to study this letter and the envelope it was mailed in. The letter is an important piece of history that helped shape the civil rights movement.

“It is significant that the letters were sent to clergymen who were moderates at that time,” Madway said. “The thrust of much of this letter is to criticize those who were advocating moderation at a time when the struggle demanded direct action — direct nonviolent action.”

Dated April 16, 1963, King wrote that he went to Birmingham as then-president of the Southern Christian Leadership Conference to aid affiliate groups before being arrested. He famously said, “Injustice anywhere is a threat to justice everywhere,” and asked the clergymen to reflect on the city’s history of segregation and to act. He continued with eloquent examples of violence and desegregation promises that weren’t upheld, while also questioning why negotiations with city officials weren’t working.

“King is an effective persuader,” Madway said. “He is saying to the clergymen that what I’m sharing with you is steeped in Christian and Jewish teachings. He’s quoting the Hebrew Bible as well as New Testament material and saying, ‘you are clergymen, but you’re not honoring your own tradition.’”

The letter offers four principles to nonviolent action, including collection of the facts to determine whether injustices exist; negotiation; self-purification; and direct action.

He closed the letter stating that one day the South will recognize its real heroes, those who stood up courageously for change. The seven clergymen the letter was sent to were urged to reflect on their past decisions and work toward a world free of segregation.