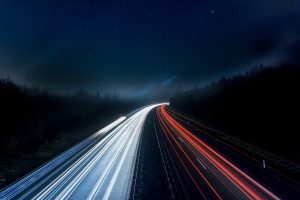 TUSCALOOSA, Ala. – During the December winter holidays, vehicle crash fatalities are higher than expected and there are more crashes along rural roads than the rest of the year, according to a study from The University of Alabama.

The study, which examined crash data from the last half of the past five Decembers, also showed several rural counties led the state during the holidays for having more crashes than during other times of the year.

During the focus period, several factors including impaired driving, swerving to avoid an animal, an unseen object or person, and driving too fast for conditions are overrepresented as the cause for crashes compared to the rest of the year.

“Increased traffic, longer nights and holiday gatherings mean there are more chances for severe and fatal crashes during the holidays,” said Dr. David Brown, who led the study for the UA Center for Advanced Public Safety in partnership with the Alabama Transportation Institute. “Drivers should take precautions to limit risk by buckling up, driving the speed limit, avoiding unnecessary nighttime driving, and never getting behind the wheel under the influence of any level of drugs and/or alcohol.”

During Dec. 15-31 in the years from 2016 to 2020, there were 6.8% more fatal crashes than would be expected as compared to the non-holiday seasons over the five years of the study.

The counties with the most overrepresented crashes were Henry, Jackson and Covington with 23%, 21% and 20% more crashes than expected, respectively.

“The cities that top the list with more crashes during the holidays than the rest of the year are all located along major federal interstates or highways, which suggests increased holiday traffic combined with other raised risk factors led to increased vehicle crashes. Drivers on these roads during the holiday season should be aware of this and drive with special caution,” Brown said.

The study employed the Critical Analysis Reporting Environment, or CARE, a software analysis system developed by CAPS research and development personnel to automatically mine information from existing databases. The software allows comparisons among crash subsets to mine the data for over-representations, which are items significantly higher than what would be expected compared to the general population of crashes. The Alabama Law Enforcement Agency, or ALEA, provided the crash records for the study.