Graduate Discovers Legacy at UA, Creates a New One 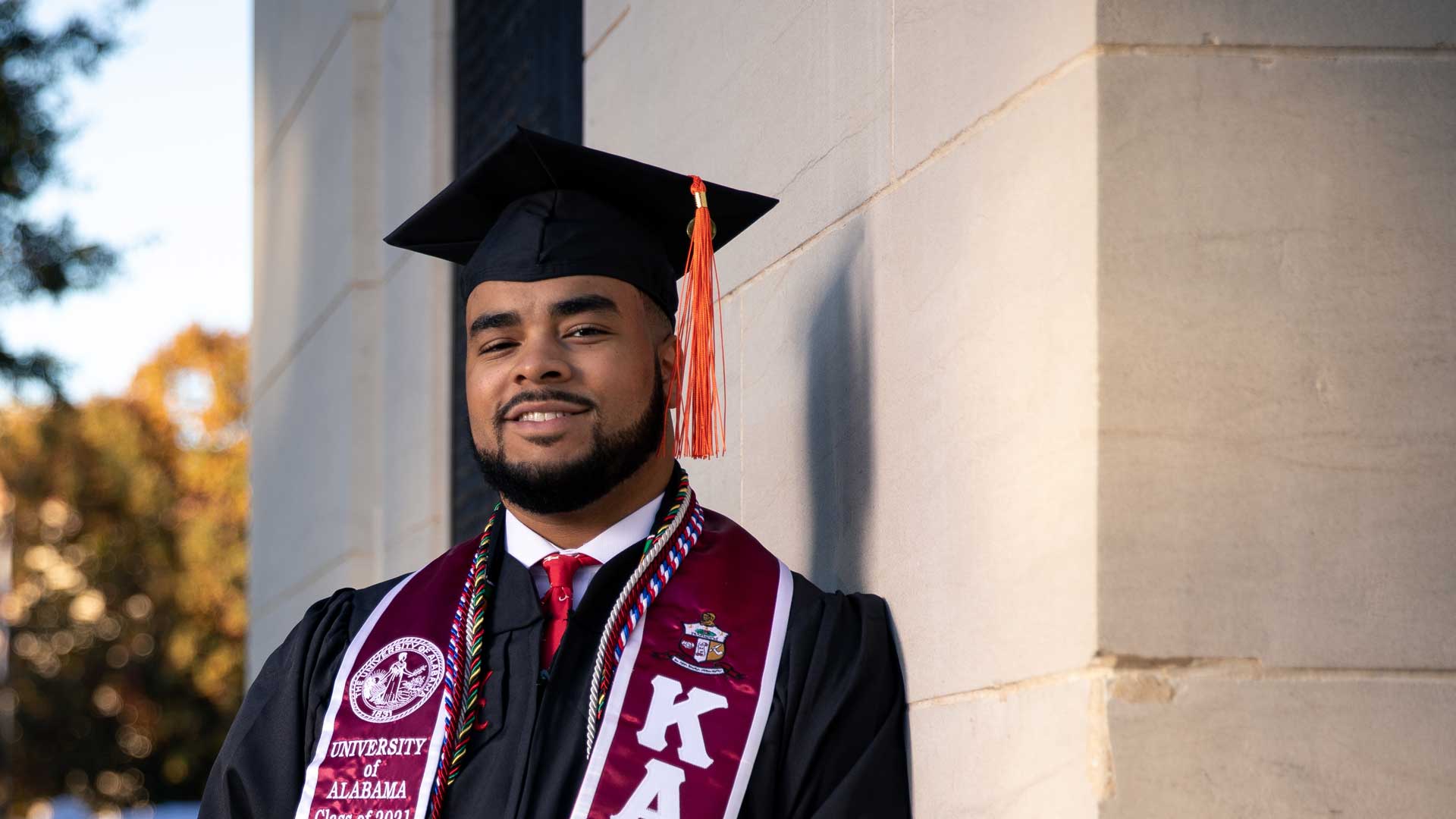 TUSCALOOSA, Ala. – On Dec. 10 at 6 p.m., Noah Evan Strong will walk across the stage at Coleman Coliseum at The University of Alabama to receive his bachelor’s degree in computer science with a concentration in cyber security.

But if his family had initially had their way, he would have never attended UA. His family had hoped he would attend the historically Black university from which many of his family members graduated.

However, the Powder Springs, Georgia, native had his eyes set on the Capstone ever since he first visited campus. He said it just felt like home, and as a trumpeter, he was particularly attracted to the Million Dollar Band, which he was a proud member of for four years.

And there was something else about UA that drew him — a deep connection he was unaware of, something in his blood that connected him to the very cornerstone of the place.

“I found out from my great-grandmother that her father, Zeb Hosea, was the campus plumber and steamfitter at UA in the early 1900s and held this job for 38 years,” Strong said.

According to newspaper entries announcing Hosea’s retirement from UA in 1949, and his obituary in 1953, there were only four buildings on campus and no fraternity houses when he started at the Capstone.

Before retiring, Hosea and his son, Kenneth Curtis Hosea, helped change that by assisting with the construction of multiple buildings on campus. Strong’s mother and Hosea’s daughter said one of those buildings was Denny Chimes.

Strong said his great-great-grandfather’s hand in building the campus landmark is a feat that instills a lot of family pride in him.

“Denny Chimes is one of the places that others may just see as another landmark on campus, but having that special connection to it because of my great-great-granddad made it feel like coming here was my destiny,” he said.

“My mom tried to dissuade me from coming to UA because she said I didn’t have a connection or a legacy here. But after we found out about my great-great-granddad, I told my mom, ‘You can’t tell me that I don’t have a connection to The University of Alabama anymore. I’m going.’ And she helped make a way for me to get here.”

Now that Strong has his class ring, which per tradition was kept overnight in Denny Chimes to be infused with the UA spirit, he’s ready to participate in another tradition, the Black Faculty and Staff Association’s Nysansapo Kente Robing Ceremony on Dec. 9, before receiving his degree and ending this stage of his journey at the Capstone.

After that, he’s off to Redstone Arsenal in Huntsville to work for the U.S. Department of Defense.

“In my time at UA, I was a part of two national championship football games, I traveled across the country with a 400-member band that became family, I gained brothers after I joined Kappa Alpha Psi Fraternity Inc., I earned a degree that has already gotten me a great job, and I discovered family roots that I didn’t previously know existed.

“UA definitely stays true to the motto of Where Legends Are Made because I definitely feel like I’m on my way from having a legacy to becoming a legend.”