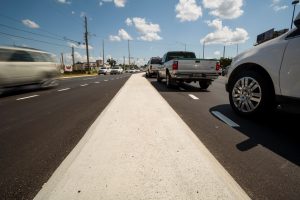 TUSCALOOSA, Alabama – Traffic crashes on Independence Day can be more severe and deadlier than most other days, according to an analysis of state traffic records by researchers at The University of Alabama.

During the past five years, the July 4 holiday averaged 2.2 fatal crashes per year, or a total of 11 fatal crashes over the five year period. This was higher than expected for that day because Independence Day has the fewest total vehicle crashes out of the week surrounding the holiday. There were also more severe crashes on July 4 with most having major causes listed as impaired driving from alcohol or other drugs as well as speeding.

“Often the only difference between a severe injury and a fatality crash is a few miles per hour in speed and whether the occupants are buckled up,” said Dr. David Brown, a researcher with the Center for Advanced Public Safety who led the study. “The high percentage of severe injuries and fatalities establishes that the crashes occurring on the Fourth of July, while fewer in number, tend to be significantly more severe.”

The study employed the Critical Analysis Reporting Environment, or CARE, a software analysis system developed by CAPS research and development personnel to automatically mine information from existing databases. The Alabama Law Enforcement Agency, or ALEA, provided crash records for the study. The software allows comparisons among crash subsets to mine the data for over-representations, or items significantly higher than what would be expected in the general population of crashes.

While other days have more fatal crashes, particularly July 5, the fatal crashes on Independence Day are higher than would be expected based on lower overall traffic crashes. It is similar with crashes with severe injuries. There are more of those than the number of crashes would suggest for the Fourth of July.

For the entire week around the holiday, crashes at night, those between 9 p.m. and 7 a.m., are overrepresented, which probably explains the high fatal crashes on July 5 as they are crashes in the wee hours after the Fourth festivities.

“This validates that the shift to nighttime crashes was caused by increased use of alcohol and drugs, and it further confirms that these crashes, most often accompanied by speed and lack of seatbelt use, are significantly more severe than crashes not caused by drugs or alcohol,” Brown said. “Clearly, it is best to avoid driving at all late-night hours on the days around the Fourth of July.”

Brown advises to always wear a seat belt as the probability of dying in a vehicle crash is 45 times greater when not wearing a seat belt.

“Get into such a habit of buckling up where you just do not feel right riding in a motor vehicle without being properly restrained,” he said. “If we all had such habits, it would save the lives of hundreds of people each year.”