TUSCALOOSA, Ala. — A perplexing group of worm-like mollusks are not primitive ancestors of the group, rather they lost many traditional mollusk traits over time, according to new evidence.

Led by a biologist at The University of Alabama, researchers found that aplacophorans, a group of worm-like mollusks with chalky scales or spikes that feed on the ocean floor, belong in the same branch as other mollusks. They lost their shells through evolution, and are not, as some thought, a primitive group who never had a shell.

The findings are outlined in a paper published in Proceedings of the Royal Society B. The lead author is Dr. Kevin M. Kocot, UA assistant professor in biological sciences and curator of invertebrate zoology in the Alabama Museum of Natural History.

“These results show that some of our traditional views about the evolution of this group were wrong,” Kocot said. “Evolution selects for whatever makes animals more reproductively successful, and, sometimes, such as in the case of parasites, becoming more morphologically simple is the direction the evolution of a lineage takes.”

Aplacophora is divided in two. Solenogastres feed mostly on soft corals, and caudofoveata burrow in the ocean floor likely digesting microorganisms in the mud. They both lack a shell like their mollusk cousins, snails and clams. Solenogastres have a reduced foot, while caudofoveatas have lost the foot.

Like other mollusks, though, most have a radula, a tongue-like organ used for eating, and mollusk gills, called ctendidia.

The group also described a new species, apodomenia enigmatica, which seemingly sits between the two groups of aplacophorans because it does not have a foot like caudofoveates, but it has the reproductive organs solenogastres. The researchers’ analysis, though, places it on the solenogaster branch of the evolutionary tree.

“It turns out it is a solenogaster aplacophoran that has secondarily lost a lot of characteristics rather than being a totally new lineage of mollusks,” Kocot said.

The genetic data of the group along with the description of the new species shed light on the evolutionary history of Aplacophora and reveal a surprising degree of morphological plasticity within the group, according to the research.

Co-authors on the paper include Dr. Christiane Todt, of a Norwegian environmental firm, Dr. Nina Mikkelsen, of the University of Bergen in Norway, and Dr. Kenneth Halanych, of Auburn University.

The work was supported by a grant from the National Science Foundation and the Norwegian Taxonomy Initiative.

Dr. Kevin Kocot used the high magnification of a scanning electron microscope to examine worm-like mollusks to see fine details of the scales, spines and other structures for specimen identification. 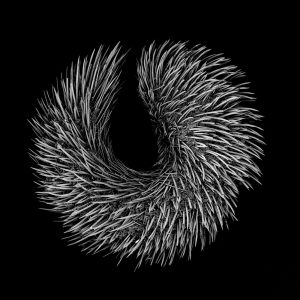 A pruvotinid solenogaster from Iceland covered in spines and hooks. 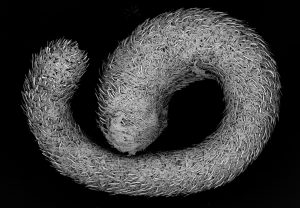 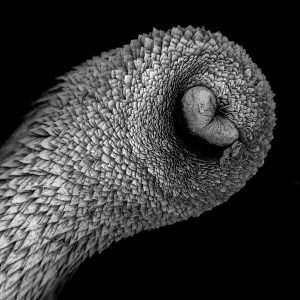 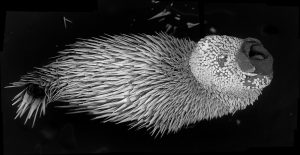