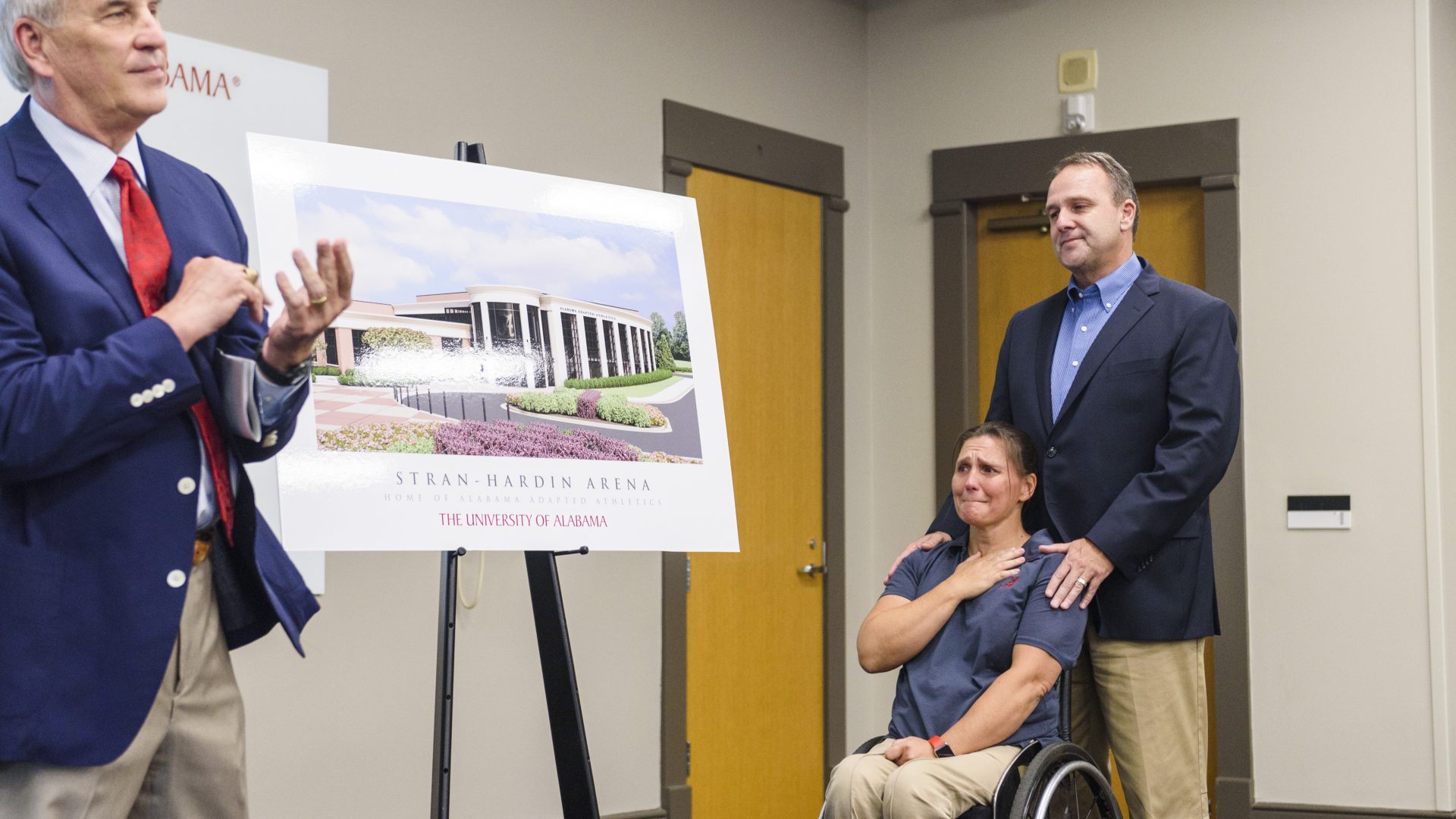 TUSCALOOSA, Ala. — Margaret Stran and Brent Hardin were excited for their friends, Mike and Kathy Mouron.

Stran and Hardin, pioneers of the University of Alabama’s Adapted Athletics program, sat Friday in the Rast Room of the Bryant Conference Center anticipating the announcement that the new state-of-the-art adapted sport facility would be named after Kathy, who, along with her husband Mike, launched the project with two gifts totaling $4 million.

Kathy stood several feet from Hardin and Stran as Mike pulled the black cloth and revealed the glossy rendering of the facility.

The name “Stran-Hardin Arena” was printed on the rendering and will rest above the main entrance to the facility, which will be completed in mid-December.

Stran gasped and began crying. Hardin did his best to hold back tears.

“We thought it was for Kathy, and we were so excited for her,” Stran said. “Mike and Kathy are wonderful people and a pleasure to be around.

Hardin said the honor made for the most “humbling day of his life.”

“To me, it’s not something that we have done,” Hardin said. “It’s something that’s been a labor of love for our whole program, starting from the very first students who were here, our presidents and administration. It’s great to be a part of an organization that really cares about doing the right thing.”

Mike said he and Kathy were honored to potentially have their family’s name on a building at their alma mater, but said Stran and Hardin truly “earned it” through their commitment to adapted sports, inclusion and UA.

“I can’t tell you how long we’ve looked forward to this day,” Mouron said. “We want to relish every minute of it.”

Stran is a two-time Paralympics medalist and former coach for Team USA. Both she and Hardin coached UA to multiple national championships in wheelchair basketball. Additionally, more than 100 students participate in UA’s non-competitive adapted sports.

“It’s an amazing journey and bigger than I’ve ever imagined,” said Stran, who was joined at the announcement by current and former players, UA administrators and supporters.

“When you look at your life, you look at who you are and who you want to be. Brent makes me a better person, and you all have helped us become more than we ever thought we could. Thank you for believing in our dreams and growing our dreams. Make your dreams for other people because we can build so much more if we are committed to it.”