Three research projects, funded with nearly $13 million, involve University of Alabama scientists studying the feasibility of pumping carbon dioxide into the ground as an alternative to releasing the greenhouse gas into the atmosphere. 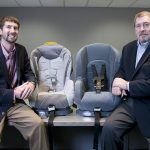 A dentist is teaming with two University of Alabama entities in attempts to provide an easy, alternative way to quickly remove a child from a safety seat in an emergency situation.

From chemists to physicists to engineers, researchers throughout The University of Alabama campus are working to develop systems designed to reduce harmful emissions, produce new ways to harness energy, improve efficiency and increase fuel...

From national security issues, to high oil prices, to environmental impacts, reasons for the growing search for alternative energy sources are broad-based. Now, a national security laboratory, with an assist from a University of...

Shiny, black magnetic films, about the size of a penny and made by University of Alabama researchers, are central to a discovery of how to conduct resistance-free electricity in a manner previously thought impossible.

With Hurricane Katrina’s intense destruction in 2005, government officials and private citizens can no longer take public infrastructure for granted. Through a series of research projects, The University of Alabama’s Aging Infrastructure Systems Center...

As gas prices hover near the $3 a gallon mark, drivers are tempted to try and squeeze every inch of travel possible from each drop of gasoline.

While the number of women scientists and engineers has certainly increased since the late 1970s, when Dr. Margaret Johnson was an undergraduate student, it has been a slow change.

Pumping gas into your car may be unnecessary in a few years. Instead, many vehicles on the highways could run on hydrogen fuel cells. Research at The University of Alabama is helping move this...

A research team in The University of Alabama's College of Engineering is assisting the U.S. Air Force in selecting the best steel alloy to use in its next generation of air-launched weapons.

A team of researchers at The University of Alabama thinks answers to traffic problems in Birmingham and other U.S. cities lie in today's advanced technology, answers that will produce safer highways, less congestion, more...